East of the Sun: the Equinox

The Vernal Equinox is coming. As I sit here in chilly Colorado awaiting up to two feet of snow, it seems like spring has made a run for the hills. But celestial mechanics say otherwise!

To help you plan your start of spring shoot (or start of autumn, for those down under), we've just added both equinox and solstice events to Photo Ephemeris Web. You'll see these events pop up in the timeline below the map. Additionally, when you click next or previous event using the date controls towards the top left, the list of events includes solstices and equinoxes in addition to the moon phase events we had previously: 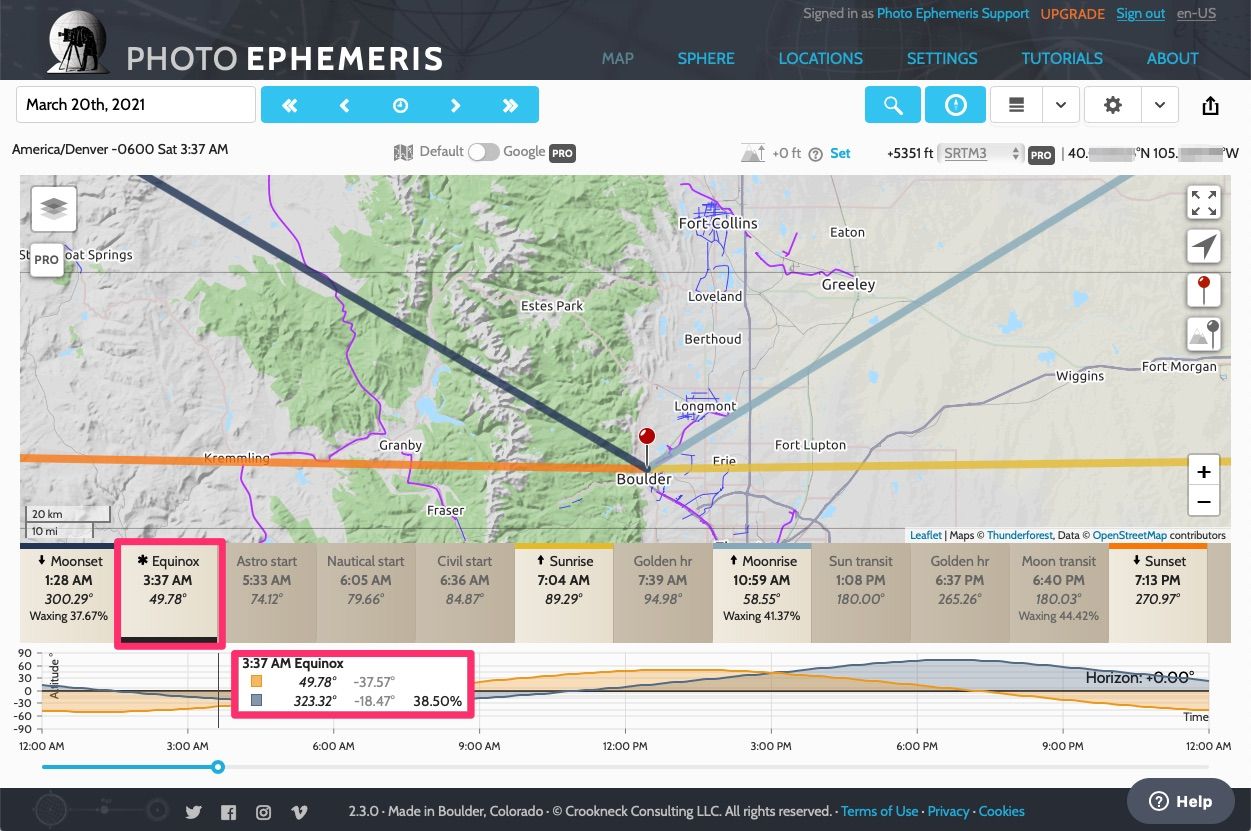 One question that often comes up goes along these lines: "I thought that the sun rises exactly due east on the equinoxes - but that's not what your app shows. Why?". Indeed, if you look at the screenshot above, you'll see that sunrise occurs at an azimuth of 89.29° rather than 90.00°.

So, yes the sun does rise more or less due east, and this indeed applies in most places, but it's a case of "sort of" rather than "exactly".

There are few reasons why it's a case of "sort of". Here are a few that I'm aware of - although I'm sure there are more!

Firstly, Earth isn't a perfect sphere: rather it's an ellipsoid. It's as if Atlas grew tired, set the Earth down and sat on it, squashing it slightly from from top to bottom. The farther north or south you go from the equator, the farther the azimuth of sunrise varies from 90° on the equinox.

In fact, the earth isn't even a perfect ellipsoid - it's a unique shape known as the "Geoid". Here's an exaggerated view: 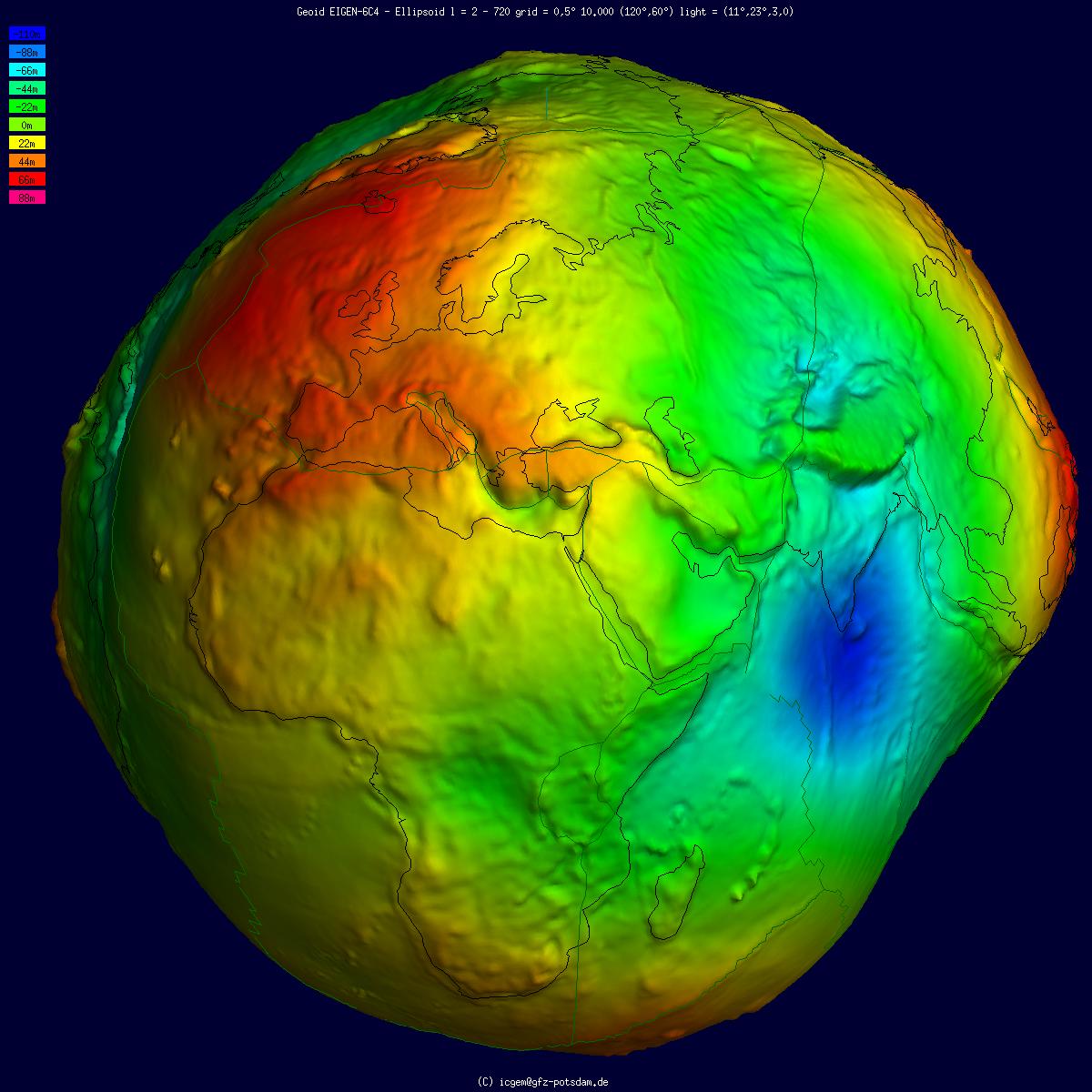 Secondly, in the vast majority of places, sunrise doesn't happen at the moment of the equinox. The equinox is an instant in time when the apparent geocentric longitude of the Sun is 0° or 180° exactly. If sunrise happens some hours distant from the moment of equinox - which it does for most of us - then some small variation in azimuth from 90 degrees naturally follows.

You can see this in the screenshot from Photo Ephemeris Web - here in Colorado, sunrise is not until several hours after equinox has occurred.

Finally, sunrise has a specific, often misunderstood definition. The timing depends in part on the effect of atmospheric refraction.

This is the 'bent-straw-in-water' effect you're probably familiar with from schooldays. Light is bent when it passes through media of differing density - such as from the vacuum of space into Earth's atmosphere. The net effect is to "lift" the sun higher above the horizon than it would otherwise appear, i.e. sunrise happens slightly sooner than it otherwise would. The effect of refraction on sunrise varies with elevation above sea level - when the air is thinner, refraction is reduced. You can read all about this and its impact on sunrise azimuth on the equinox in this paper: Astronomical Refraction and the Equinox Sunrise

Once conclusion of the paper is that the ideal 90.00° azimuth equinox sunrise is only to be seen at the Equator, due to the effects of refraction. If we try to eliminate some of the effects mentioned above by choosing our location carefully, we indeed find exactly 90.00°: 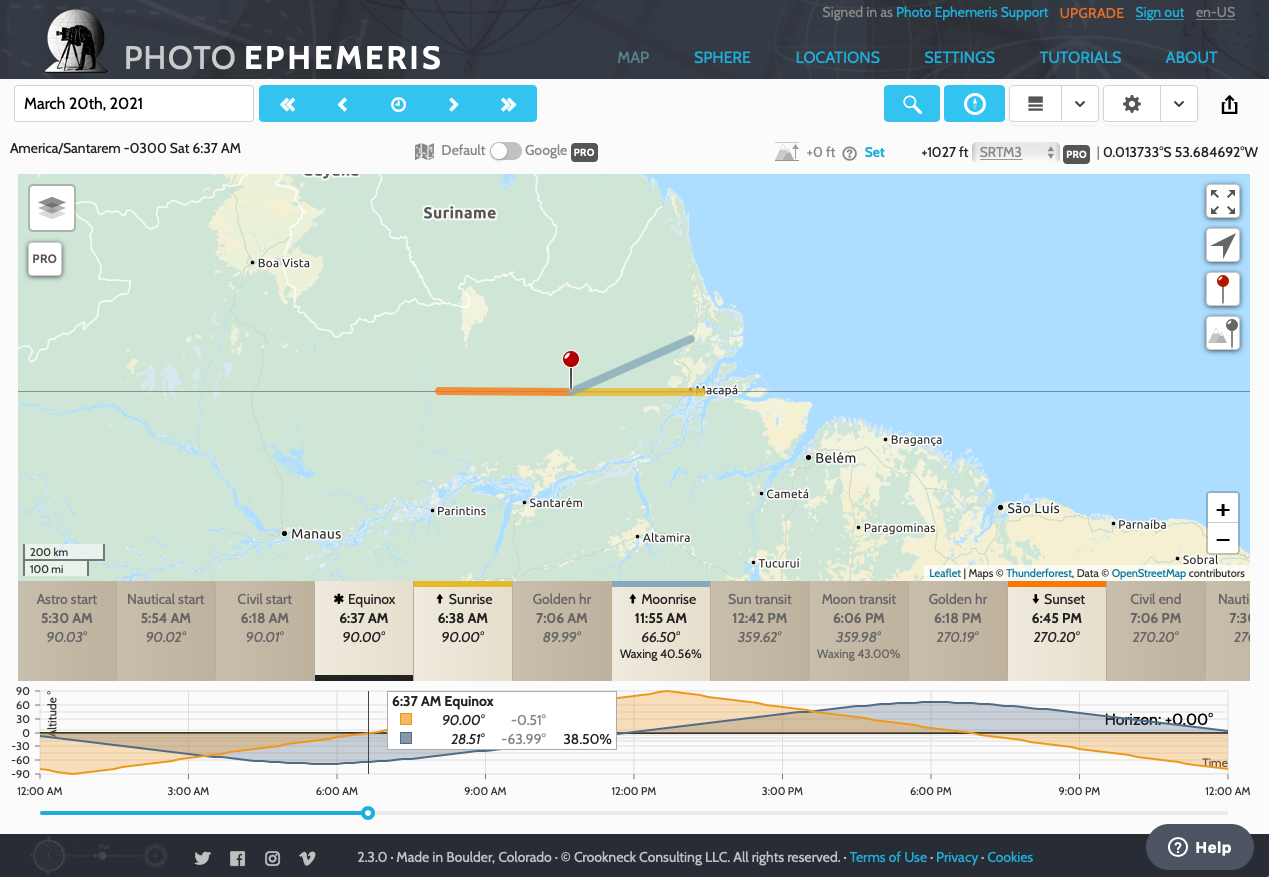 At this spot in the remote Amazon jungle, right on the equator, we're also at a longitude that brings sunrise very close to the moment of equinox.

If you're interested in exploring these effects more, you can try experimenting by dragging the map pin directly north (e.g. to Newfoundland and Labrador in Canada) or directly east, (e.g. to equatorial Indonesia). Check out what happens to the azimuth of sunrise on the day of the equinox - you'll see that it's due east. Sort of!