Magical Gold and Blue: Confusion in the Twilight Zone

I’m always interested to see new developments in photography apps, keeping a close eye on updates. This excerpt from the latest release notes of a sun tracking app caught my eye:

It sums up one of the biggest hang-ups I have with the terms ‘Magic’, ‘Golden’ and ‘Blue’: what do they actually mean? It’s almost certainly not what’s implied in the quotation — that ‘magic hours’ comprise ‘golden’ and ‘blue’ hours — but the problem goes deeper than that.

To paraphrase Louis Armstrong, it’s likely a case of you’ll know it when you see it. However, it’s impossible to pin down any precise, generally accepted definition of the terms.

The Photographer’s Ephemeris has always included the three twilight types that have generally accepted precise definitions: civil, nautical and astronomical. These correspond to when the sun is between 0° and -6°, -6° and -12° and -12° and -18° respectively. It’s the elevation angle of the sun (termed altitude by astronomers) that determines how much light remains in the sky (other factors, such as cloud cover, being equal).

The twilight zone: where confusion reigns

So what about the terms ‘Magic’, ‘Golden’ and ‘Blue’? Sure, they’re popular amongst photographers, but if you were to look up the definition of ‘Blue hour’, what would you be told?

The blue hour is the period of twilight during dawn each morning and dusk each evening when the sun is a significant distance below the horizon and the residual, indirect sunlight takes on a predominantly blue hue.

But of course, that doesn’t really help. If you check the meaning of dawn, you’ll read:

Dawn (from an Old English verb dagian “to become day”) is the time that marks, depending on the specific usage, the beginning of the twilight before sunrise, [1] [2] the period of the pre-sunrise twilight [3] or the time of sunrise.

i.e. dawn doesn’t have a precise definition either…

Golden hour (photography), the first hour after dawn and the last hour before dusk

What do photography apps say?

Here’s a quick survey of the various definitions that a sample of five different apps (A, B, C, D, E) use for ‘Blue’ and ‘Golden’ hours:

Viewed graphically, relative to the horizon (+0°), we have: 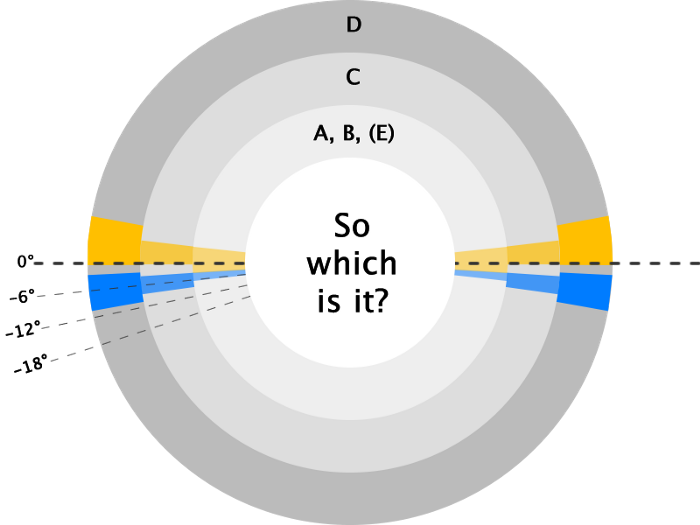 Clearly there are no agreed definitions of ‘blue’ and ‘golden’ hours, although you might observe that three of the five do use the same definition of ‘golden hour’.

What about ‘Magic hour’?

Notable by its absence in the above list is ‘magic hour’. I’d argue that understanding what ‘magic hour’ means gives us a clue as to why the quasi-consensus definition of ‘golden hour’ as -4° to +6° might be viewed as incorrect.

I didn’t appreciate the fundamental difference myself until receiving some useful clarification from a professional cinematographer and commercial photographer:

“Magic Hour” is the only time early or late where the complete lack of direct highlights from the sun — in combination with a still extremely-bright sky which is still lit by the sun, produces what we call “Liquid Light” — the only source of light reaching the metal surface of an automobile for example, is the open sky without any highlights or flare from the direct sun — because it has just set either on the actual horizon or even better, behind a local “feature”.

The lack of direct light in combination with a bright sky is what makes ‘Magic Hour’ — as it happens, that’s also a pretty good description of civil twilight.

‘Golden hour’ is not a term much used by cinematographers, it seems. It is viewed as something from the world of stills photography, particularly landscape.

So, if ‘golden hour’ is something different from ‘magic hour’, then it seems wrong to use a definition which directly overlaps with ‘magic hour’. Moreover, there’s a huge difference between direct and indirect light in terms of what is photographically possible: defining ‘golden hour’ to straddle sunrise or sunset seems conceptually untidy.

Applying the principle to ‘magic’, ‘blue’ and ‘golden’, and the standard twilight phases, I’d argue that ‘magic’ and ‘blue’ are pretty much redundant, as they both overlap with nautical and civil twilight (to varying degrees depending on whose definition you subscribe to).

Tweaking the ‘blue hour’ definition to altitudes in-between the standard twilight boundaries seems more like a tip-of-the-hat to camera and film high ISO capabilities of the last twenty years or so.

If we’re going to keep the term ‘golden hour’, then I think it should (i) serve a useful purpose (ii) have a logical, defensible definition and (iii) not arbitrarily overlap into other well-defined periods, such as civil twilight.

While cinematographers and commercial photographers might typically not want direct sunlight on their subjects, landscape photographers frequently do, particularly at the ends of the day when the light softens to yellow, orange and red due to atmospheric scattering.

Scattering is a function of altitude (elevation angle) of the sun: the longer the path sunlight takes through the atmosphere, the more scattering occurs. The more scattering, the redder the remaining light that reaches the subject.

So, there is an argument in favour of having a term — let’s call it ‘golden hour’ — to indicate when the quality of direct light will be starting to show these effects: ‘sweet’ light, if you will.

The change from ‘harsh’ to ‘sweet’ light occurs on a continuum: there’s no instant that marks a switchover. If we then have to choose a moment, why not make it consistent with the existing accepted definitions for twilight, assuming that it is also consistent with the qualitative experience of starting to notice golden light?

That’s why I prefer to define ‘Golden hour’ as being when the sun is between +0° and +6°. (And this is the definition Photo Ephemeris uses.) 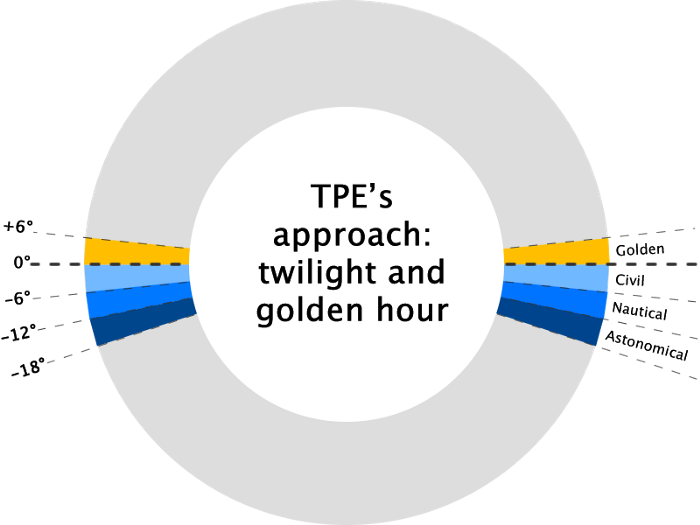 Yes, +6° is arbitrary, but it is the same altitude spacing as the twilight phases and keeps things nicely mutually exclusive.

While both ‘magic’ and ‘blue’ hours arguably extend longer as camera technology continues to improve (or when a building blocks the sun, in the former case), ‘golden hour’ so defined, like its twilight counterparts, depends only on an fixed, measurable quantity: the altitude of the sun.