You've probably read: there's a lunar eclipse coming up next week on Nov 7/8 (depending on your location). It will be visible in the Americas, across the Pacific, and in east Asia, Australia, NZ. Sorry Europe, Africa...

It's also the last in the current 'batch' - the next doesn't come around until March 14, 2025, so you may want to make an extra effort to see it if you can.

Perhaps you've come across the term Selenelion? Or not - it's not one of those everyday terms, for sure. According to Wikipedia, a selenelion is:

A selenelion or selenehelion, also called a horizontal eclipse, occurs where and when both the Sun and an eclipsed Moon can be observed at the same time. The event can only be observed just before sunset or just after sunrise, when both bodies will appear just above opposite horizons at nearly opposite points in the sky. A selenelion occurs during every total lunar eclipse-- it is an experience of the observer, not a planetary event separate from the lunar eclipse itself.

If you try to search for photographs of this phenomenon, there are very few. Many don't show the actual phenomenon at all, or are photo art. However, the image included in the Wikipedia Article is the genuine thing: 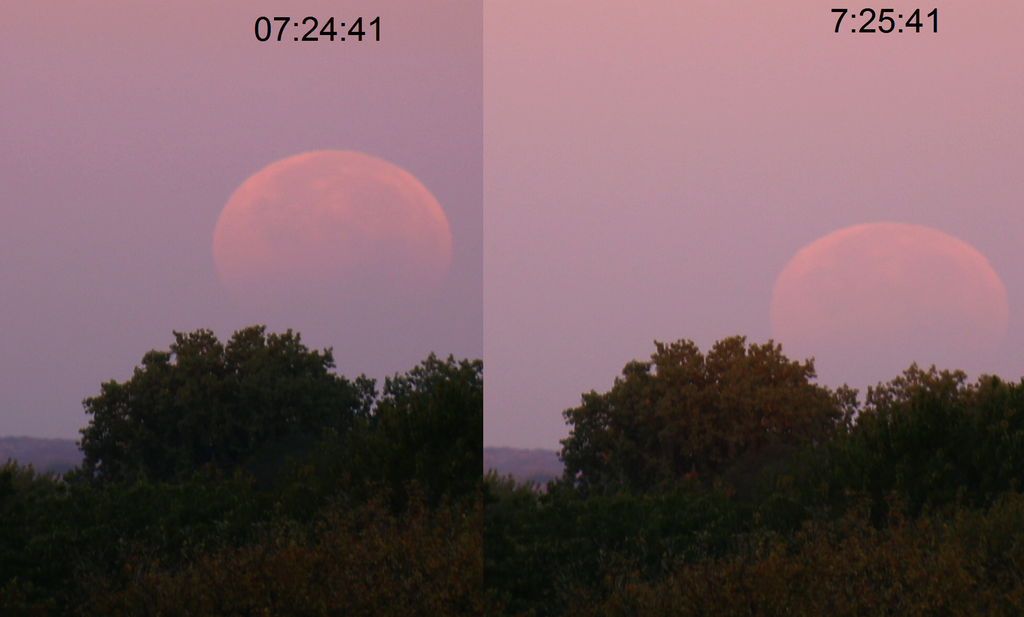 You may be wondering: how can the Moon lie in the Earth's shadow (the definition of a lunar eclipse) and yet we can see both sun and moon simultaneously? Good question. Here's the simplistic view of the setup (forgive the Friday morning sketch made in a cafe):

Right: not to scale. It's not like the average photographer is tall enough to see 'around' the earth's surface, like Eve observing both Alice and Bob from a street corner, while Alice and Bob cannot see one another.

The reason a selenelion can be seen at ground level is atmospheric refraction. Just as a drinking straw in a glass appears bent at the interface of air and water, light entering Earth's atmosphere (e.g. from the sun, or reflected from the full Moon) bends around the Earth's surface. Effectively, we can 'see' around corners thanks to air:

That makes this sequence of events possible, if you're in the right spot:

The eclipse begins, the Sun rises, then the Moon sets. Of course, if you're at sea level, the sky is naturally bright after sunrise, and so it can be very difficult to make out the eclipsed moon at all, even with the help of atmospheric refraction.

There's one thing you can do to improve your chances of getting a compelling shot of the selenelion: go higher. You've probably seen the wonderful photos taken by astronauts on the International Space Station. Well, you don't need to go that high, but it's a reminder that the higher you are, the farther you can see. The formal name for the effect is the 'Dip of the Horizon', illustrated in simple form here:

The angle of dip is marked (and it's larger than shown due to refraction too!). This means that the observer, standing on top of a mountain, for example, when looking at the terrestrial horizon, is actually looking down. A high prominence summit with a view of the ocean might have a dip of 1-2 degrees, i.e. the horizon is at minus 1-2 degrees.

In Photo Ephemeris, you can compensate for elevation of the observer above the horizon, as described in Using Photo Ephemeris Web, Part 4: Horizon. When you enable the adjustment, you'll see that sunrise and moonrise happen earlier, and sunset and moonset later - it's not uncommon to see a change of up to 10 minutes.

When you increase your height above the horizon, the air is thinner, clearer, often cleaner, and you'll typically see darker higher contrast skies, all of which can make an eclipsed moon after sunrise easier to see.

Here's the challenge - no, not to go to Peru, but instead to capture a truly compelling shot of a selenelion. In my mind, I imagine the photographer stood atop a mountain looking out towards the eclipsed moon setting over the ocean, the rising sun bathing the foreground in orange light, with the blood orange moon setting into an azure sea. Poetic, right?

You'll need to find a high elevation location with a clear view to the ocean, where the timing of the eclipse is just right. As it happens, South America has plenty of such locations for the Nov 7/8 eclipse. Here's one potential setup:

The red pin shows the camera location. The grey pin is there to highlight a nearby high point that could block the sun (but doesn't quite!). You can see the rising sun illuminating the land (including the red pin location), and off in the distance to the left, the eclipsed moon setting over the ocean. (This screenshot uses the 3D Sphere in Photo Ephemeris Web PRO). A map view may help you get your bearing more easily:

And zoomed in tighter on the shooting location:

Now, I've no idea whether this location is safely reachable in spring in Peru (there is a trail marked from a nearby road, but it's at nearly 16,000 feet above sea level). Nonetheless, it illustrates what's needed to achieve what should be an ideal selenelion shot setup.

We'd love to see any and all of your lunar eclipse shots, but if you manage to grab that rarest of things, a great selenelion shot, be sure to let us know!